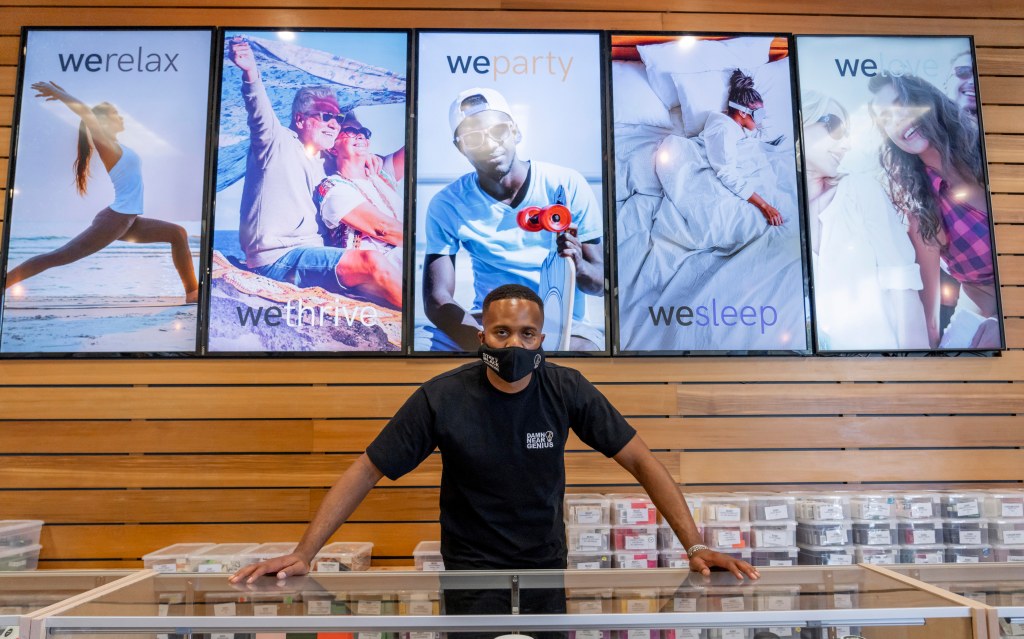 When musicians make it big in the industry, one of the first things many do is quit their day jobs.

But aspiring rapper and singer Robert Ellis IV, a Redlands native who now performs as Pullupnsplash, got into music industry to promote his day job in marketing and as an independent consultant for several dispensaries and cannabis brands.

“Being in the cannabis industry we’re scrutinized, we don’t really have a way to fairly get our voice out. We’re very regulated as far as marketing, so I had to think outside the box and use music as my freedom of speech, and they can’t take that away,” Ellis said.

The 30-year-old, who now lives in South Pasadena, recently launched a record label called Damn Near Genius with a humorous debut song and video featuring a weed-loving Santa spreading green joy. It’s all part of Ellis’ plan to promote and advocate for the cannabis industry with music.

“I see this as the best way to get our voices out,” Ellis said.

And for those in the cannabis industry, it’s not always easy to get their voices out there to potential clients.

California voters approved Proposition 64 in 2016, but there are strict rules in place when it comes to advertising that essentially bans most ads.

So Ellis’ approach is creative, necessary and a natural fit for cannabis, industry experts say.

“Music and cannabis have a long history and go together like peanut butter and jelly,” said Ellen Mellody, account supervisor at Mattio Communications Agency, which works with more than 50 clients in the cannabis industry.

“I think what Robert is doing is creative, not unlike what we see in influencer videos, which is another creative workaround for brands to reach cannabis consumers,” she said.

“With so many brands in the marketplace, having a catchy song like Robert’s I think is something that consumers will remember and it helps the brands that participate with him,” she added.

While Ellis is passionate about cannabis, he’s also been into music his entire life.

“My mom was a singer, she was in a band. She also sang in the choir and had me sing in the choir and I always wrote music just for fun but I never took it seriously until I figured out how to monetize it and that’s how this came into play,” he said.

Ellis launched the label about a month ago, which so far has a couple of artists on board who Ellis will be collaborating with, including Stunnaman02 from San Francisco and Australian-born singer and songwriter, Tayo Ricci, who also appears on the label’s first video “Smoke What I Smoke,” a holiday-themed song released just before Christmas set to the melody of the holiday classic “Do You Hear What I Hear?”

In the video, Lilli Passero, a semi-finalist on Season 12 of NBC’s “The Voice,” sings “Can you smoke what I smoke, hit that weed and don’t choke.” Ellis, meanwhile, is dressed as “Brodie Claus” in a blinged-out Santa outfit, rapping about weed as he passes out various cannabis products to adults on his nice list.

Ellis partnered with a Santa Ana-based dispensary Weden, where part of the video was filmed. And since this is all to promote cannabis, the video includes closeups of several products from the company.

He will release a video for new song “Hooligans” in a few weeks with another cannabis-themed parody and is also planning on teaming up with other dispensaries for future song releases this year.

But even if he’s a hit in the music industry, don’t expect his current career to go up in smoke.

“I don’t want to be like a rap star, I’m a serial entrepreneur, I want to build and grow brands,” he said. “Rap is just one part of this,” he added.