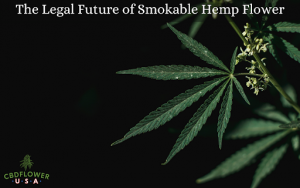 The Hemp Farm Bill of 2018 was the first step towards turning hemp into one of America’s cornerstone cash crops. The production and sale of industrial hemp were legalized for licensed growers, so long as each harvest has a THC content of less than 0.3 percent. Hemp flowers with THC content above this threshold are considered to be marijuana and are therefore treated as a schedule 1 substance.

This means that a hemp farmer could lose their entire crop if it tests at 0.4 percent THC rather than 0.3 percent. The point is – hemp farmers are already jumping through tons of regulatory hoops to even have the opportunity to produce industrial hemp. The fact that smokable hemp flower is in the crosshairs of several state legislatures could be a death blow to several farmers.

CBD tinctures extracted from hemp are by far the most popular hemp-derived product amongst consumers. They contributed an estimated $1 billion in sales to the CBD market. Tinctures allow you to discreetly administer drops to your mouth or to something you are eating or drinking. Lawmakers are mostly comfortable with tinctures because of this discretion. As long as the CBD is extracted from hemp and not marijuana, hemp-derived products are viewed neutrally.

Smokable hemp flower, on the other hand, has a negative perception amongst many lawmakers. At least one of those reasons is rooted in science. The hemp plant contains many cannabinoids besides THC and CBD. One of them is THCA, which converts to THC when heated. Some lawmakers feel like The THCA in the hemp flower puts the THC content over 0.3 percent when heated, thus making it marijuana.

Some states, like Vermont, have made provisions to account for this distinction. Smokable hemp flower can have less than 1 percent of THC when heated and still be considered hemp rather than marijuana.

The other primary argument against smokable hemp flower is controversial.

Police forces around the country over how much legal hemp flower looks and smells like illegal marijuana. They are, for all intents and purposes, the same plant. The only real difference is the amount of THC present.

You can imagine the type of tough scenarios law enforcement might encounter. Say they stop someone who just bought a pound of hemp flower. Since it smells like marijuana, the cops use this as a justification for their search.

They find the pound and arrest the driver because they assume it is marijuana. The driver asserts that their rights are being violated because they have committed no crime. The cops have no field test or in-house lab test that can measure THC percentage accurately enough to distinguish between hemp and marijuana.

The outcome of such a case is all but guaranteed. The seized product will be sent to a lab that can distinguish between hemp and marijuana. If it has less than 0.3 percent THC content, which is pretty much certain if it was purchased through legal channels, the case will be dismissed.

This person would then have a legitimate argument if they wanted to move forward with a wrongful arrest lawsuit.

Law enforcement officials around the country are now running into problems because there is now risk with using cannabis smell as a justification for a search.

Essentially, lawmakers are against smokable hemp flower because it makes their jobs harder.

A few states have proposed or passed provisions to the farm bill that imposes an outright ban on smokable hemp flower. These states are Louisiana, Kentucky, Indiana, Texas, and New York. A handful of other states are considering similar legislation for 2021.

This year is going to be monumental for the fight to keep smokable hemp flower legal. 2020 saw small victories in a few states. North Carolina will be keeping smokable hemp legal through 2021, for example, but the fight is sure to pick back up by the end of the year. The ban in Texas was also enjoined until 2021, but it is back in effect for now. New York’s ban started on January 1st of this year, although the fight is still very much alive to get it reversed.

Pro-hemp lawyers argue that laws singling out smokable hemp flower violates the allowances outlined in the farm bill, and they are technically right. At least one judge in Texas has ruled that smokable hemp cannot be singled out just because it would cause law enforcement to have to change tactics.

Hemp farmers are hoping more judges around the country feel the same way. Selling hemp flower to retailers to be sold whole is much more profitable for farmers than selling it wholesale to extraction companies. Banning smokable hemp flower could alter the hemp production landscape forever.

Among the monoterpenes, we have limonene, which gives a smell similar to lemon depending on its proportions and varieties. Other known terpenes of this variant are myrcene, pinene, eucalyptol, and linalool. All of them have names referring to other plants and their traditional scents. They are related to the alleviation of anxiety and, in some cases, cancer treatment.

The most common monoterpene in the world is myrcene. It is mainly composed of thyme oil; its smell is earthy and may resemble that of cloves. However, its presence in nature is vast, being found massively in mango and other trees such as lemongrass. One of its primary functions is sedative, which is why it’s taken into account in treatments against insomnia.

Hemp, favored for obtaining CBD, is where myrcene can be found in higher concentrations. For this reason, its effects are more typical of relaxation and calm anxiety.

On the other hand, there are also different terpenes of the sesquiterpenes type. The best known is caryophyllene, which is present in the different varieties of the plant. This terpene is also found in black pepper and has anti-inflammatory properties.

As a hemp CBD flower vendor, we pride ourselves on spreading awareness for the industry’s most important issues. The last thing we want to see is our customers lose the ability to enjoy strains like Otto 2, Banana Bread, and Hawaiian Haze. We promise to be a positive force in the fight to keep smokable hemp flower legal across the country.

This content is provided as a membership benefit to our valuable business level members. Due to several factors including the variances in state hemp laws and the differences in interpretation of federal law, NHA makes no warrants of the legality, efficacy or safety of any product, service or statement made by any third party.

We encourage all members and the general public to do their own due diligence on any business or product, and understanding their state’s and federal laws, before choosing to purchase any product or contracting for any service.