Planet 13 Holdings Inc. (OTCQB:PLNHF) has been on the rise in recent weeks and months since its April lows. The entire cannabis sector is once again heating up as we head into another election period.

Its easy to get excited about Planet 13 which recently raised $10 million CAD which will help with their planned dispensary in Santa Ana, California. The Company recently reported $63.6 million in revenues for fiscal 2019 a 200.4% increase from 2018.

Planet 13 Holdings Inc. (CSE:PLTH) (OTCQB:PLNHF) is a vertically integrated cannabis company based in Nevada, with award-winning cultivation, production and dispensary operations in Las Vegas – the entertainment capital of the world. Planet 13’s mission is to build a recognizable global brand known for world class dispensary operations, and a creator of innovative cannabis products. As the world’s largest cannabis dispensary, the Planet 13 Superstore offers a unique and awe-inspiring experience for visitors from around the globe. The superstore features over 50 retail vendor and offers over 70 strains of cannabis.

To find out the inside scoop on Planet 13 Holdings Subscribe to Microcapdaily.com Right Now by entering your Email in the box below 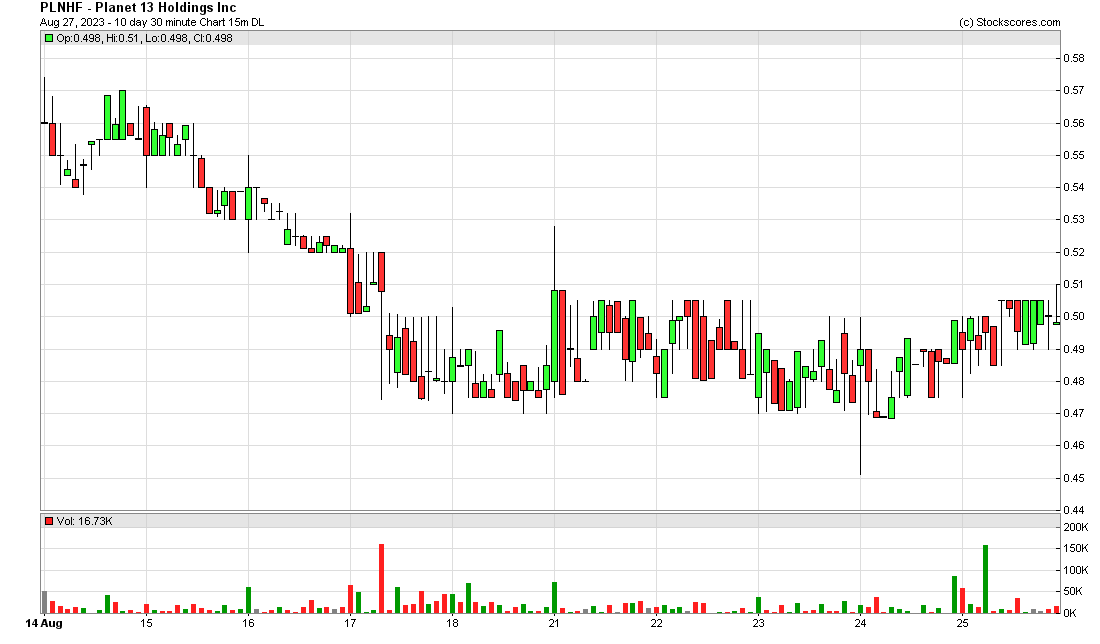 Microcapdaily first reported on Planet 13 back in September 2018 stating at the time: Currently trading at a $130 million market valuation Planet 13 Holdings is an exciting cannabis Company the operates a medical and recreational dispensary in Las Vegas which has brought $8 million in revenues for the first six months of 2018. Planet 13 Holdings is also building what is expected to be the largest cannabis entertainment complex on planet earth, located Las Vegas. Planet 13 Holdings has quickly attracted a fast growing shareholder base who believes this one goes higher.

Planet 13 is in the process of opening a new dispensary in Santa Ana, California; Bob Groesbeck Co-CEO of Planet 13 commented “We’ve evaluated hundreds of locations in California and continue to believe that our Santa Ana location is the best suited for a Planet 13 style dispensary. While we can’t forecast how COVID-19 might affect our timeline, we’ve negotiated an agreement that reduces the upfront capital invested, gives us control over the timing of fixed costs and provides flexibility on dispensary buildout. We de-risked the transaction substantially while securing the next stage of growth for Planet 13.”

The launch of Elysium is a point of excitement for Planet 13; In mature markets, cannabis beverages make up ~10% of edible purchases. According to Planet 13 its Elysium Cannabis Beverages, launched last week, at SuperStore, is already a top-selling beverage SKU in Nevada. Elysium is a line of sparkling flavored beverages available in five flavors: Valencia Orange, Persian Lime, Eureka Lemon, Wild Berry, and Ruby Red Grapefruit. All flavors are low calorie, zero sugar using all-natural fruit flavorings and designed for an uplifting high.

We have a Monster Pick Coming. Subscribe Right Now!

Currently moving steadily higher Planet 13 Holdings is an exciting cannabis Company that operates the largest cannabis entertainment complex on planet earth dubbed as the “largest dispensary on earth” The Supertores has seen expetional growth and brought in $16.8 million for the 1st quarter 2020 up from $13.8 million for the same period last year, an increase of 21.4% Planet 13 is expanding with the recent acquisition of Newtonian Principles, Inc. resulting in Planet 13 acquiring a California cannabis sales license held by Newtonian, and 30-year lease for a dispensary in Santa Ana, California.We will be updating on Planet 13 when more details emerge so make sure you are subscribed to Microcapdaily so you know what’s going on with Planet 13.

Disclosure: we hold no position in Planet 13 either long or short and we have not been compensated for this article