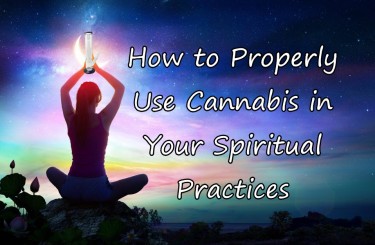 There’s a rising conflict occurring between the legality of cannabis and various spiritual practices. For many years, religions were “strictly no drugs” – save for the few pagan religions out there that embellished that kind of thing.

However, when referring to the major religious institutions;

Cannabis and similar plant medicines were considered “taboo” or “not spiritual”. This is partly due to the social framing from the government in that “drug use is inherently pathological”. The problem with this is that evidence suggests that virtually all of these religious ideologies were birthed from – psychedelics and/or other mind-altering practices.

Recently, in a Meditation Thread on Reddit I spoke to folks about cannabis use and meditation. For some, it was a hindrance while for others it was a beneficial thing. This made me wonder – how to properly introduce cannabis into YOUR spiritual practices is key. We may have lingering “mental algorithms” that tell us that “smoking weed is bad”, when our rational mind says – “but look at the evidence”.

In order to help bridge this cognitive dissonance, I will draft up some basic principles to consider and perhaps this can help you integrate cannabis and/or other plant medicines into your spiritual practices.

Framing of Cannabis is important

Is cannabis a drug? A Medicine? Both? Depending on where you place your faith, you will have a prejudice towards the plant. In most religious cases, cannabis is framed as “something to avoid” because it leads to a plethora of hypothetical “issues”.

It’s important to separate ‘government propaganda’ from religious texts. If you closely investigate most religious texts – there is never an explicit warning against the use of cannabis or any other “mind altering substance” except for alcohol.

It is very clearly written in many texts that alcohol can lead to major issues, whereas cannabis is not even mentioned.

In fact, cannabis could have been a critical part of the religious rites practices by the folks in those religious texts. For example, it is speculated that cannabis was an integral ingredient in the anointing oils used by Jesus. (Source)

How can cannabis be wrong if Jesus used it?

People tend to think in materialistic terms. You can’t blame, it’s like Madonna said – “You’re living in a material world”. However, materialism isn’t the only way to view the world. You can shift your perspective to understand common things like “plants” in a new light.

For example, a plant could simply be organic matter organized with different vitamins, enzymes, and chemical structures in it, or one could view them sort of in the same capacity as a “capsule of specific ingredients maintained in a system”.

This system has a direct impact on your physiological and psychological construct – meaning, you have the ability to alter your consciousness according to your will.

When you look at cannabis in the light of a “plant technology” you begin to see that it has a “function” as does everything that grows on this green earth.

It’s illogical for religions to shun the very technology produced by earth without the intervention of “human”. It would be akin to denying the divine on earth. In fact, taking exclusively pharmaceutical drugs is essentially suckling on Satan’s teet. (Just saying)

Peace or Uncertainty – Your internal guide

You may be in conflict with your religious ideology, but what does your gut say? Do you feel peace smoking cannabis? Does it interfere with your communication to the deity of your choice?

In the Reddit conversation, I explained that cannabis is neither good nor bad – it simply is cannabis. However, if you feel like you’re doing “evil” by smoking cannabis – you’ll be right every time. That’s because good and evil is highly subjective.

It falls into the paradigm of duality – and if you happen to be in a religion that views cannabis as “evil” then according to that belief structure – it is.

But what happens if you simply clear your mind from all religious assumptions and simply “feel” how you feel when smoking cannabis. Be honest. Does it relax you or make you more anxious? Does it feel “wrong” inherently or just another option for “relaxing”?

People who try to live according to rules of those who lived thousands of years ago will always be in conflict with those who are living in the “now” pushing forward to the future.

Certain ethic groups view tobacco consumption as part of their religious rites. They would light a bundle of tobacco, waft it around, inhale the smoke and exhale it all as part of a grand spiritual gesture. A visualization of how the smoke dissipates into the ether, how their intention floats into the universe – how they commune with the “Great Spirit”.

There is no reason why Cannabis can not be used in the same capacity. In fact, all of my “Weedscraft” articles hints towards cannabis in a spiritual context – it’s just a bit more theatrical when you’re dealing with Magick.

You have to realize that no matter what religion or spiritual practice you are engaged with currently – it has been altered more times than you can ever imagine.

Take the Bible for instance – there was a time when it was interpreted that woman had to serve their husbands – yet today, that is no longer the case for many Christian sects. Owning Slaves is totally cool in the Bible – but we’re not seeing anyone trying to defend their religious rights in that context in 2020.

The point is – you might think that your spiritual philosophy is “unchanging” – the truth is, these ideologies are constantly modifying itself out of convenience to survive the passing of time – otherwise they divert to myths and legends.

Smoke a blunt while meditating on this article and you’ll come to the same conclusion. 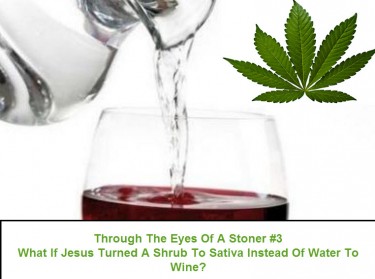 STONER SPIRITUALITY – WHAT IF WINE WAS SATIVA WITH JESUS?