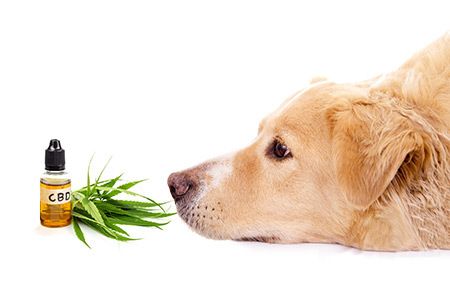 New findings from a pilot study to assess the use of cannabidiol (CBD) oil for dogs with epilepsy are “promising and exciting,” according to a recent release from Colorado State University.

The study, led by Stephanie McGrath, MS, DVM, DACVIM, a neurologist at Colorado State University’s James L. Voss Veterinary Teaching Hospital and sponsored by Applied Basic Science Corporation, assessed the short-term effects of CBD on seizure frequency. Of the dogs that received CBD in the clinical trial, Dr. McGrath’s team found that 89% had a reduction in the frequency of seizures, the release states.

In this blinded study, 26 client-owned dogs with idiopathic epilepsy were assigned randomly to either the treatment or placebo (control) group for 12 weeks; 12 dogs were treated with CBD-infused oil, while 14 were given noninfused oil. All dogs remained on standard anticonvulsant medications, including phenobarbital and potassium bromide. After exclusions, nine dogs in the CBD group and seven in the control group were included in the analysis.

The CBD oil used in the study was derived from hemp, which has 0.3% or less of the psychoactive component of cannabis (THC), the release states. The compound is not considered to be marijuana and can be used for research purposes, based on the 2014 Farm Bill.

In addition to the distinct reduction in seizure frequency in the dogs that received CBD, there was a significant association between the degree of seizure reduction and the concentration of CBD in the blood. “We saw a correlation between how high the levels of CBD oil were in these dogs with how great the seizure reduction was,” Dr. McGrath says in the release.

Want to get involved?

The team at CSU is currently enrolling dogs with epilepsy for a clinical study. To qualify, dogs must have had a minimum two seizures per month for four consecutive months and be on therapeutic levels of conventional anticonvulsant medications. To learn more about this study, click here or email [email protected]

Based on the results of this study, Dr. McGrath adjusted the dose of CBD oil for dogs in an ongoing clinical trial that aims to enroll 60 client-owned dogs with epilepsy (see Want to get involved? at right). She also hopes to launch a new study later this year to determine the optimal dose of CBD to treat epilepsy in dogs.

“It’s really exciting that perhaps we can start looking at CBD in the future as an alternative to existing anticonvulsive drugs,” she says in the release.